David Lloyd was one of the most well-known and prolific deer stalkers of the 20th Century, allegedly accounting for over 5,000 deer, but he was not just a hunter.

Born in 1910, Lloyd was an accomplished pilot, though considered too old to be called up for the Second War. He instead became a flight controller, working during the Battle of Britain at Tangmere, West Sussex.
​
Lloyd was a metallurgist and a qualified engineer to boot. Although not a trained rifle maker, he a studied the craft and became obsessed in creating the ultimate stalking rifle and in the 1936, he set up David Lloyd & Co, his own custom rifle business based out of Pipewell Hall in Northampton. 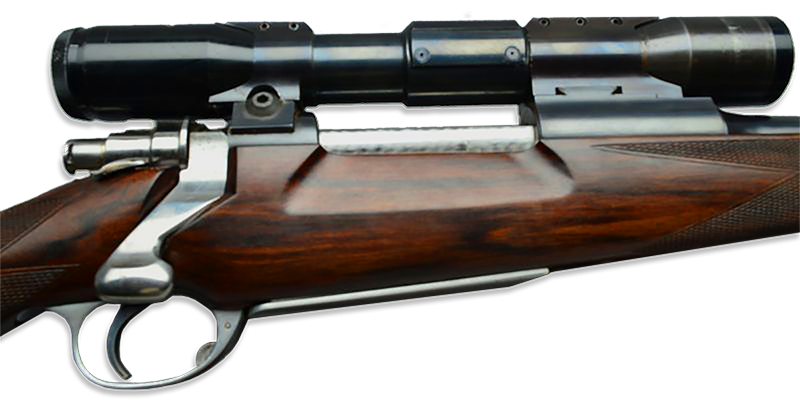 THE ORIGINAL MOUNTING SYSTEM INCLUDING ITS PROTECTIVE STEEL SHEATH

For Lloyd, the ‘ultimate’ stalking rifle meant one that surpassed the accuracy of any other rifle available on the market. In the early 1930s he understood that, although in their technical infancy, rifle scopes were extremely accurate and it was the mounting systems that often let the user down.

By the late 1940s, Lloyd recognised that the mounting system he was to create must be rugged enough to endure the worst weather available, the harshest terrain on offer and, as often he mentioned to his clients, the design needed to be able to endure the clumsiest of clients who were prone to knocking and dropping their rifles.

Dependability - Why the Difference

The design created in 1949, Patent No. 646419, was for a scope mounting system that covered the scope in a metal sheath, fixing it almost entirely solidly and very low down in profile. The scope and rifle would be constructed as a single unit, and it is this basic design concept that would set the David Lloyd Rifle apart from its competitors and indeed all other rifle on the market at the time.

Clients specified their bullet make, weight and type at the point of order so that the rifle could be zeroed correctly during manufacture.
​
Such was Lloyd’s insistence that the scope would never move and the rifle would never lose it zero, he even went as far as to remove the scope turrets and prevent clients from being able to adjust their windage or elevation. “My rifles do not need re-zeroing,” he was heard to say to clients on more than one occasion!
An original lloyd catalogue

​David Lloyd died in 1996 and his widow continued to run the business for some years. In 2006, Ronald Wharton (from Rigby’s) purchased the company with the backing of his long time client and friend, Francis Beardsworth. Ron and Francis' first significant change was to the mounting system, which were changed to the New Improved Model No.1 Scope Mounts.

A MODERN LLOYD RIFLE WITH THE NEW IMPROVED MODLE NO.1 SCOPE MOUNTS

The New Improved Model No.1 Mounts

The new mounts were designed to accommodate the modern rifle shooter: today, we prefer to be able to re-zero our rifles as and when necessary. The new Lloyds will retain their zero just as they did before, but the wider range of available ammunition means users may need to adjust their scopes from time to time and it is this concept that is now possible.

The New Improved Model No.1 Scope Mounts were specifically designed to only take the Swarovski Z6i scope. At the time of the design of these new mounts, the Z6i was deemed to be the ultimate hunting scope, and it continues to hold its position at the very top of the market, ensuring the new design remains relevant today.

As an additional service, older David Lloyd rifles may also be converted to the New Improved Model No.1 Scope Mounts to accommodate the Swarovski Z6i.

Lloyd built his rifles predominantly on reconfigured miltary Mauser ’98 actions. Today, we continue to use these actions, just as we do on our Charles Lancaster bolt action rifles, and we continue to make the rifle’s significant features, such as the bolt handle, to the traditional shapes.

All other specifications remain wholly bespoke, ensuring that each rifle is totally unique, built entirely to the buyer’s requirements.

OLD AND NEW: A MODERN DAY LLOYD (ABOVE) AND AN ORIGINAL LLOYD (BELOW)
BACK TO 'GUN ROOM'